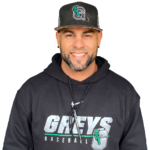 Gonzalez was signed by the Los Angeles Angels of Anaheim in the 2007 MLB Draft. In 2007 he was in the MiLB Champions Orem Owlz in which  he finished the season 2nd in Team Hitting with a .325 batting average.

Gonzalez was in MLB Spring Training Camp with the Angels in 2008 getting his first hit off the Cubs RHP Kerry Wood.  He has played winter ball with the Mayaguez Indios of the Roberto Clemente Puerto Rico Professional League and is a strong hitting instructor and mentor to many Major League players today.

Gonzalez is now one of the owners of the Empire Baseball League and the  Empire State Greys.