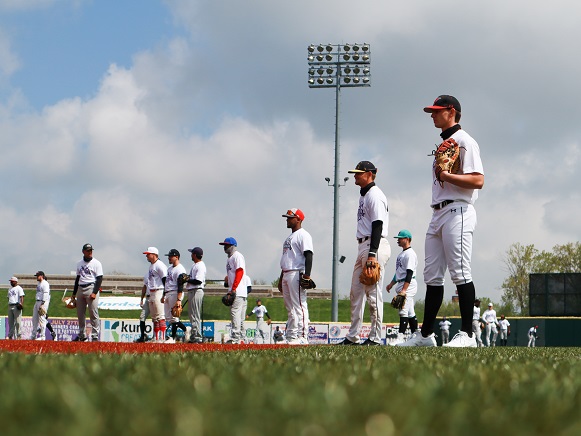 The Frontier League of Professional Baseball has announced that their 29th annual Tryout Camp and Draft will be held on Monday, April 25 and Tuesday, April 26 at Y’alls Ballpark in Florence, Kentucky.

CLICK HERE TO REGISTER FOR THE 2022 TRYOUT CAMP AND DRAFT

All 16 Frontier League teams will be represented at the workouts, and scouts from multiple Major League Baseball teams also attend each season.  Representatives from other independent leagues participate as well.  Advance registration is available at frontierleaguetryouts.eventbrite.com.

The workouts officially begin at 9:00 AM on April 25 and will feature running, fielding and throwing drills for infielders, outfielders, and catchers, and batting practice for position players while pitchers will throw 15-20 pitch bullpens.  Following the first day, the field managers will post a list of players invited back for inter-squad games on April 26.  Immediately following the conclusion of the games, an on-site draft will be conducted.

All players attending the Tryout Camp and Draft will receive analytic data of their performance, including pitch speed and spin rates for pitchers and launch angles and exit velocities for hitters.

An average of 35 players have been drafted and signed to spring training contracts over the past eleven seasons.  Several draftees have gone on to be signed by Major League Baseball organizations, with four having ascended to the Major Leagues (Chris Jakubauskas, Seattle; Josh Smoker, New York Mets; Chris Smith, Toronto; and Robert Stock, San Diego).  Two players from the 2021 Tryout Camp and Draft signed with MLB organizations, while Ryan Hennen was voted Rookie of the Year and Pitcher of the Year.

“Every year teams find impact players out of the Tryout Camp and Draft, and in each of the past 11 seasons at least one attendee has been signed by a MLB organization after beginning play in the Frontier League,” commented Frontier League Deputy Commissioner Steve Tahsler.  “Y’alls Ballpark is a great facility and easily accessible.  We expect another strong turnout as our teams finalize their spring training rosters.”

All players trying out must wear turf shoes or molded cleats.  Players attempting to enter Y’alls Ballpark with metal cleats will be disqualified from the workouts.  In addition, there is a strict no seed policy at the stadium, and all tryout participants are not permitted to bring seeds into the facility.